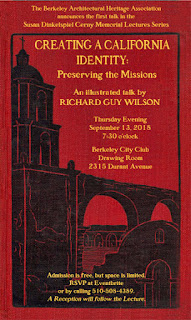 BAHA is pleased to announce the First Annual Susan Dinkelspiel Cerny Memorial Lecture. Endowed by friends of Susan Cerny, the lecture is free to the public, but seating is limited, so registration (at Eventbrite) is required.

In his illustrated talk, Professor Richard Guy Wilson will focus on efforts in the late 19th and early 20th centuries to save the crumbling missions of Spanish California, and discuss how those efforts spearheaded the historic preservation movement in the state.

Susan Dinkelspiel Cerny was a past BAHA president and longtime BAHA board member, past member and chair of Berkeley’s Landmarks Preservation Commission, author of Berkeley Landmarks, editor of and contributor to An Architectural Guidebook to San Francisco and the Bay Area, and a tireless advocate for preservation.

posted by Daniella Thompson at 12:04