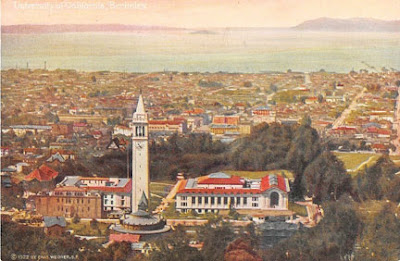 These four eclectic walking tours will explore the history and architecture of our community from the U.C. campus to a district of literary landmarks, and from People’s Park to the Hayward Fault. Our knowledgable guides include U.C. students and librarians, authors, and community historians.

Admission $15 per tour
Purchase tickets online (attendance limited to 25 persons per tour). Ticket holders will be notified of the starting place[s].

The late 19th-century campus of the Deaf and Blind Schools featured an array of brick buildings and a clock tower. (Edward H. Mitchell postcard)

Berkeley’s First Public Institution and Its Neighborhood: The Deaf School and the Clark Kerr Campus

The first State of California institution to come to Berkeley was not the University of California but the California State Institution for the Deaf, Dumb, and Blind—later the California Schools for the Deaf and Blind. In 1866, the Schools acquired a new, expansive, campus site at the undeveloped base of the Berkeley Hills. They remained in Berkeley for well over a century, but the land is now the University of California’s Clark Kerr campus. We’ll walk through the handsome and extensive grounds, view the architectural reminders, and hear the stories of six eras of development and use, from the 1870s onwards. We’ll also cross the Hayward Fault and see telltale evidence of it, and look “next door” to the Kerr Campus at what is one of Berkeley’s very oldest surviving residential buildings, an 1860s country house.

This walk is not wheelchair accessible, and will include stairs, steep sidewalks, and some dirt pathways.

Mystery and science fiction notable Anthony Boucher in his study at home on Dana Street, where he did most of his writing and editing. (California Monthly, 1947)

Berkeley has an astonishing number of literary associations, and this walk will explore some of the most intriguing. We’ll wend our way through the pleasant south-of-campus Le Conte neighborhood and nearby, seeing interesting buildings and sites connected to important writers and their works, hearing the stories behind them, and sharing literary excerpts and anecdotes.

The walk will feature places associated with William Anthony Parker White (aka Anthony Boucher), the highly influential mid-century mystery and science fiction writer and editor, who was a Cal alumnus. He made his home in this neighborhood from 1942 onward, and set several of his stories in Berkeley. We’ll also see places associated with Boucher’s fellow mystery writer Mary Collins, the California Writer’s Club, pioneering film critic Pauline Kael, and others.

Our guide is a U.C. Berkeley librarian who curates the Bancroft Library’s California Detective Fiction Collection, which includes over 2,000 mystery, crime, and detective novels with Bay Area connections.

This walk is on mostly level sidewalks and city streets.

This past Spring, Professor Margaretta M. Lovell focused her History of Art 190G class on intensive study of the architecture, buildings, and history of the U.C. Berkeley campus. Two of her students will lead for BAHA an eclectic walking tour across the eastern portion of the campus, highlighting stories and history of a variety of buildings, and the character of the campus as a built environment representing the diverse work of John Galen Howard, the university’s first Supervising Architect, and others. From the Hearst Memorial Gymnasium to Hearst Avenue, explore and hear insights about the nearly 150-year-old campus through the eyes of some of its newest users.

This walk will cross the campus primarily on paved pathways and sidewalks, but may include some stairs.

Before it became one of the flash points of the 1960s, the block where People’s Park is located was a neighborhood of old Berkeley homes, many of them architecturally significant. In 1968, the University of California abruptly demolished about two dozen of those buildings. Community activists created People’s Park on the vacant ground the next year, half a century ago. Our walk will observe the park itself and talk about its history, legacy, and possible futures. We’ll also walk along the surrounding blocks, which are literally lined with landmarks, including several of Berkeley’s most architecturally and historically important buildings, and where we’ll see how the park acts as a commons, with architectural history as a backdrop.

This walk will be on largely level sidewalks, but may include some short excursions onto lawn areas.

posted by Daniella Thompson at 14:55