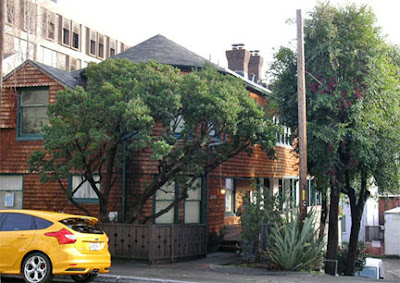 On 4 February 2016, the Berkeley Landmarks Preservation Commission designated the Bennington Apartments, 2508 Ridge Road, a City of Berkeley Landmark on the basis of a landmark application submitted by Daniella Thompson.

The Bennington Apartments were created in 1915 from the joining of two adjacent 19th-century single-family homes that had originally stood at 1801 and 1805 Euclid Avenue and were moved to the rear of their lots, reoriented, and placed end-to-end. The resulting building is the only extant relic of 19th-century Euclid Avenue.

Constructed circa 1892, the two houses were among the earliest built in the newly subdivided (1889) Daley’s Scenic Park tract. Joined, these houses represent the oldest surviving Shingle Style building on the Northside and—alongside the Anna Head School’s Channing Hall and Maybeck House No. 1—one of the three oldest known original brown-shingle buildings in Berkeley.

The building’s owner, Rue-Ell Enterprises, appealed the landmark designation to the City Council. Following a public hearing, the Council voted 8-1 to uphold the landmark designation. Not content with the Council’s decision, Rue-Ell sued the City of Berkeley in 2017. The Superior Court judge sided with the City. Rue-Ell then contested the Superior Court judge’s decision in the Court of Appeal.

On Thursday, 31 October 2019, the Court of Appeal’s three-judge panel rendered a seven-page decision in favor of the City. Summing up their analysis, the judges wrote:

“[…] we cannot say, on the record presented, that the LPC was wrong to find the necessary level of architectural significance met for landmark status under the Ordinance. When the cited associational history is taken into account as well, the basis for the LPC’s landmark designation seems doubly sound. To put the matter plainly, the record shows that the Bennington is really old and really unique for its combination of design features and its associations with people who had significant roles in the early civic life of Berkeley. Considering the record as a whole, that is enough to uphold LPC’s designation as a proper exercise of discretion.”

posted by Daniella Thompson at 11:20