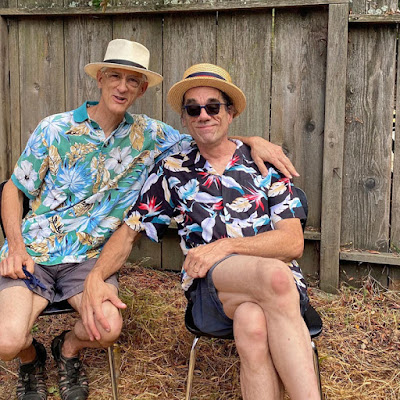 Dmitri and his partner, Tom White, received their first BAHA Preservation Award in 2008 for the interior and exterior restoration of their 1907 Colonial Revival cottage in South Berkeley. That was our introduction to their preference for intense, jewel-like paint colors.

In 2010, Dmitri and Tom rescued the landmark Cheney Cottage (Carl Ericsson, builder 1902) from demolition when they acquired it from the University of California for $17 and had it moved in two pieces—first to University Village in Albany, where it sat for a year while they navigated Berkeley’s inscrutable permit process, then to its final site on 62nd Street, where they restored it, again with their customary exuberant palette. This effort earned them a second BAHA Preservation Award in 2013.

When the developers of Acheson Commons offered two historic brown-shingle buildings on the 1900 block of Walnut Street for $1 each, Dmitri and Tom answered the call. In 2017, they successfully moved the smaller of the two, a duplex, to 2214 Martin Luther King Jr. Way, where restoration was undertaken. The second brown-shingle, a sixplex, proved too large to move and had to be abandoned.

During his tenure as a BAHA board member, Dmitri took charge of the Kenney Cottage, a prefabricated panel house, built in 1887, for which BAHA had been trying unsuccessfully to find a permanent site and new ownership. Dmitri and Tom cared for the cottage on its temporary City-owned lot while continuing the search for a suitable site. Pressured by the City to move the cottage, BAHA transferred the title to Dmitri and Tom, who dismantled the cottage and put it in storage in 2018. With Dmitri’s death, the future of the cottage remains uncertain.

We send our heartfelt condolences to Tom and to the Belser family.

posted by Daniella Thompson at 13:13