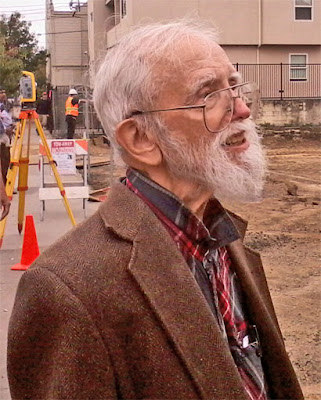 BAHA is mourning the passing, on 30 November 2021, of our old friend and stalwart supporter John English. A retired Oakland city planner, John was the ultimate authority on land-use matters in Berkeley.

Born in Washington, DC and raised in Sacramento, John lived in Berkeley since his student days in the late 1950s. Although he never worked for the City of Berkeley, his opinion was sought by Planning staff, city commissioners, building professionals, and preservationists alike.

He was a constant presence in Landmarks Preservation Commission and Zoning Adjustment Board meetings, as well as at BAHA, where his deep knowledge, dedication, and attention to detail were relied upon again and again.

John was a quiet, unassuming man who gave his all to the causes he embraced. The fight for preservation will not be the same without him.

posted by Daniella Thompson at 10:07