When Your City Becomes the Campus 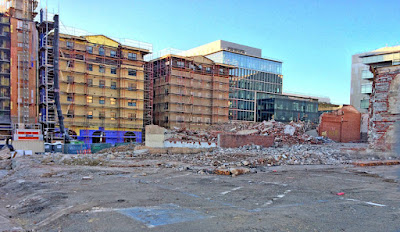 What do they have in common?

They’re all associated with the presence of a large university in your town.

The “gown swallows town” phenomenon is not unique to Berkeley. As universities are transforming themselves into billion-dollar hedge funds with schools attached, multiple cities nationwide face trials similar to ours.

In his book In the Shadow of the Ivory Tower: How Universities are Plundering Our Cities (Bold Type Books, 2021), Davarian L. Baldwin takes the reader to municipalities across the land, revealing the increasingly parasitic relationship between universities and our cities. Through eye-opening conversations with city leaders, low-wage workers tending to students’ needs, and local activists fighting encroachment, Professor Baldwin makes clear who benefits from unchecked university power, and who is made vulnerable.

Professor Baldwin’s talk will present case studies from various American cities and offer possible solutions, including a recent resolution between a state and a major university.

A leading urbanist, historian, and cultural critic, Davarian L. Baldwin is Paul E. Raether Distinguished Professor of American Studies and founding director of the Smart Cities Lab at Trinity College in Hartford, CT. His work largely examines the landscape of global cities through the lens of the African Diasporic experience. Baldwin’s related interests include universities and urban development, the racial foundations of academic thought, intellectual and mass culture, Black radical thought and transnational social movements, the politics of heritage tourism, and 20th- and 21st Century art, architecture, and urban design.

A link to the Zoom webinar will be e-mailed to ticket buyers before the event. Five books will be raffled.

posted by Daniella Thompson at 11:05